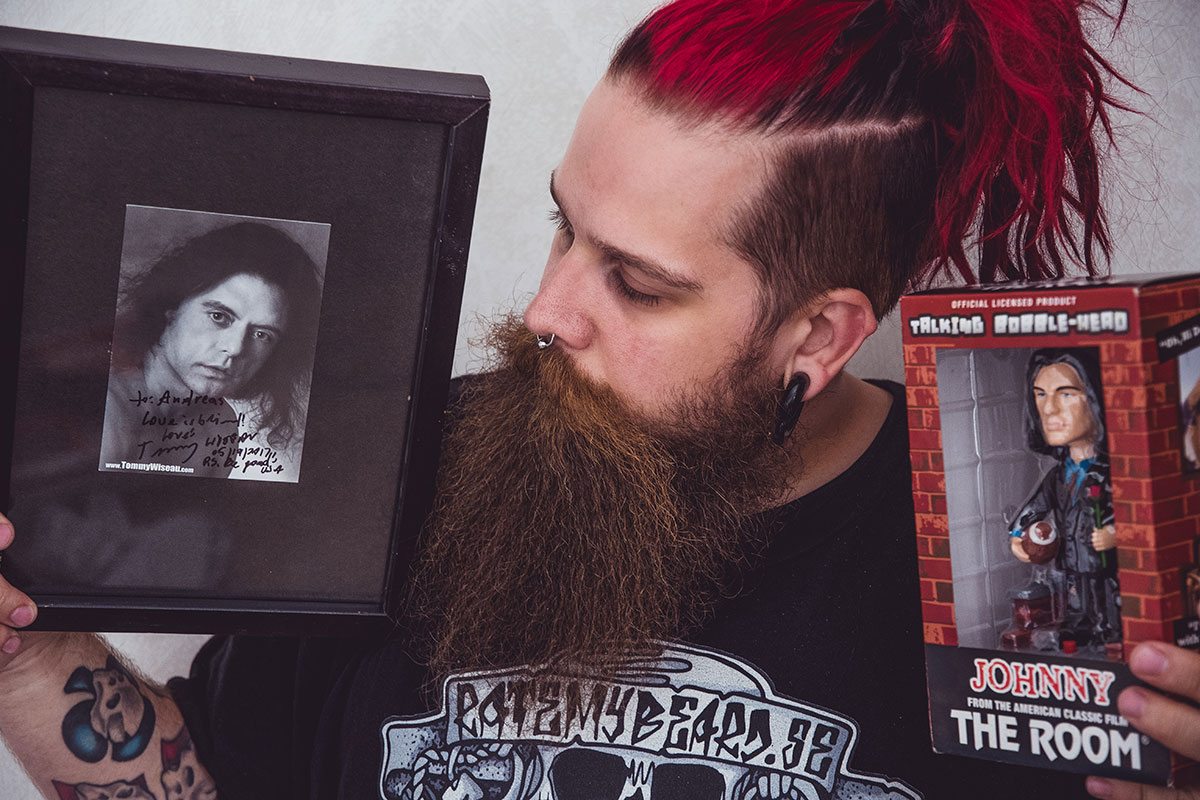 Birthday gift from Tommy Wiseau – He is tearing me apart!!!!

A birthday gift from Tommy Wiseau, who would’ve thought!

It’s not everyday you receive a birthday gift from the legend himself – Tommy Wiseau. You should’ve seen our faces when we opened the package and found a signed picture, a talking bobblehead of Tommy and another signature on the back of the box. For those of you who don’t know who Tommy Wiseau is, please read my other posts about the movie The Room, and the movie The House that dripped blood on Alex.

So, it’s my birthday, June 1st, and I’m turning 34, and I got this amazing thing in the mail today, how can I not love it and cherish this piece of movie history and Tommy Wiseau memorabilia.

I’m not sure if it says USA at the end, and if I’m wrong, please let me know in the comments.

I got an autographed picture and a Tommy Wiseau bobblehead as a birthday gift, along with the personal note. I mean, this is huge, this is beyond huge, this is cataclysmicly huge! I never been startstruck before and I’ve met a lot of celebrities during my days as a photographer. But I really wish we had recorded our reaction when we opened the package, I actually giggled, laughed and almost cried out of excitement. A birthday gift from Tommy Wiseau…. So, I can call it a day now, haha!

No, but for real, me and my girlfriend will look at this thing and remember this day forever, how we opened the package in the car and bursted out in laughter and happiness.

As for the bobblehead, it talks!!!

It comes with a few famous quotes from the movie The Room, and it’s hilarious! Here’s a clip showing you how it sounds. I could press that red button all day long, but for now Tommy goes back in the box and up on our bookcase for everyone to see. I love this bobblehead, and the autographed picture, a perfect birthday gift.

And if you haven’t seen The Room yet, do so, you will not regret it. Check out the IMDB page here!

Tommy Wiseau – The House That Drips Blood On Alex… Here we go again!

Tommy Wiseau – the man, the myth, the legend?!

I wrote about Tommy Wiseau’s movie The Room yesterday and urged you to watch it, and I hope you did. Let me know what you thought in the comments.

So, I also wrote that I would write a post about another one of Tommy’s masterpieces, and here we are. This one is called “The House That Drips Blood On Alex” and follows the main character (Tommy Wiseau) Alex, who buys a house on Blood Street, and you know what that house does? Well, it drops blood on him… hence the title The House That Drips Blood On Alex. Clever, right?!

This one is a short film and lasts for about 14 minutes, unfortunately it’s not a full length movie, because the acting, story and special effects are in fact “better” then in The Room, and by better I mean worse. Or are they?! I really can’t tell, they might be on the same level as The Room tho. This short film has a lot to offer even tho it’s only 14 minutes long, and if you are like me and my girlfriend, you really should grab pen and paper and start writing down the weird stuff they say in the movie. A fun game for example, is to count how many times Alex (Tommy Wiseau) says the name “Thomas”, haha. It’s hilarious.

Tommy really gives it his everything when it comes to deliver a horror themed feel to the movie, especially the scene where he wakes up in the middle of the night, looks into a mirror in a slight off angle and lets out a chilling and horrifying roar, oh wait, did I say horrifying roar? I meant a constipated moan…

The story of the movie follows Alex, who buys a house on Blood Street from a shady salesman played by Joey Greco of all people, Greco insures Alex that the house is NOT located on Blood Street, but that it’s pronounced Blut Street. And as soon as Alex moves in, the house starts to drip blood on him, and all of Alex’s friends says it’s paint, ketchup or that it’s nothing to worry about. After some heavy dripping and agonising time for Alex, he decides to return to the realtor to demand an explanation, but to his surprise the office where Joey Greco was working…. is empty….. dum dum dum.

Alex then decides to check the attic and see what is causing the dripping, and this is where the movie comes to conclusion, if the conclusion was made up by a senile panda, high on mushrooms in a pitch black room, hanging upside down from a spinning ceiling fan.

Although it’s only 14 minutes, the movie is full of hilarious little things to keep an eye on, I’m gonna list a few, but let me know in the comments if you find more funny stuff.

First of all, when Alex friend is visiting with pizza, check the writing on the moving boxes in the living room….
Check Alex’s (Tommy Wiseau) hand when he is shining and shaking his flashlight in the attic.
Notice the angle and weird placement of the mirror when Alex wakes up in the middle of the night.
Listen to the dialog when Alex is signing the papers to the house with a feathered pen.
Count the number of times Alex says the name “Thomas” in the course of a 14 minute long movie.

Oh, and another great thing? The movie is available to watch for free on Vimeo, which means you can watch it right here on AndreasFransson.com. Just start the embedded player below and enjoy one of best worst acting in the world. Tommy Wiseau is a genius, I said it yesterday and I say it today, you can’t go wrong with his movies and I really hope that he makes more movies in the same spirit of The Room and The House That Drips Blood On Alex.

Now, sit back and enjoy, grab a drink and most of all, have fun!

The House That Drips Blood On Alex from Dos Rios on Vimeo. 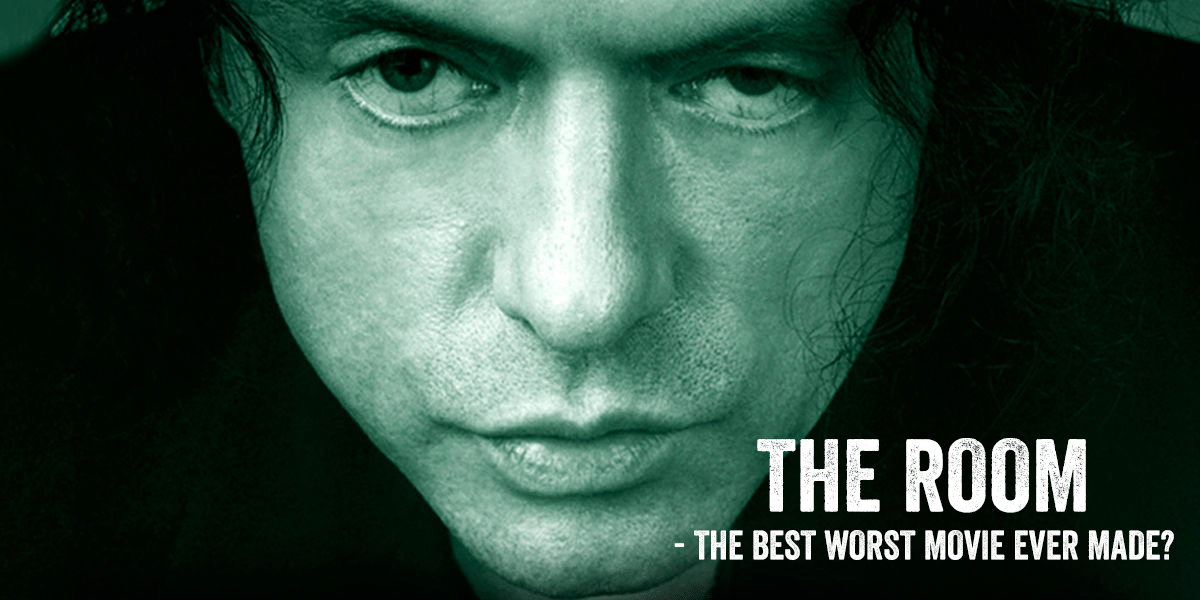 The Room – The best worst movie ever made? Or are there “better” ones?

The Room – a movie so bad it gained cult status – it’s hilarious!

If you have not seen the movie The Room yet, you definitely should. It’s directed by the very special Tommy Wiseau, a man know for his special “acting” skill and directing. The Room have collected a huge number of followers around the world, not because being a great movie, but being probably the best worst movie ever made. You can check out the movie on IMDB here!

Some of the lines in the movie can’t be described in a good enough way to give them credit. The randomness and awkwardness is almost to good to be true. My girlfriend introduced me to The Room about 4 years ago and since then we have watched it… oh I don’t know, maybe 50 times, at least! Why? Because even tho it’s supposed to be a romantic drama of some sort, the acting, scenery, the obvious use of a green screen and bad lines keep us coming back for more. We even sometimes had a pen and paper beside us to write down funny things.

Tommy Wiseau is a genius for making The Room, and I don’t know if he ever thought it would get the kind of following it has. The movie was released in 2003 and yet to this day in 2017, fans all over the world throw screenings at movie theatres for other fans. Actor Greg Sestero who played Mark even wrote a biography/behind the scenes book about the movie and his role in it. In the book “The Disaster Artist” (<— affiliate link) Greg Sestero tells us about Tommy and his many odd behaviours and quotes, he also tells us how life on stage was and how all the actors got along during filming. If you ever find yourself watching The Room, be sure to also read The Disaster Artist to get the full grasp on the legend that is Tommy Wiseau.

“Anyway, how is your sex life?”

Yes, that is actually a line from the movie, where the main character, played by Tommy Wiseau, just switches from one thing to another and asks he’s co-actor how his sex life is… It’s priceless!

I really can’t explain how amusing this movie is, everything from the music, acting, scenery to characters are so bad(?) or genius. I urge you, please watch The Room, you will be disappointed, yes you read that right, because if you are hoping for a great movie experience, you will be disappointed. But if you watch it with the mindset that this might be the funniest thing you’ll ever see, then you will get pleasantly surprised.

Have you seen The Room? What did you think of it? Leave a comment below.

Next time I will talk about another Tommy Wiseau movie called “The House That Dripped Blood on Alex“. Another attempt by Mr Wiseau to make a movie, this time a short one, but the amount of cringe and laughs you get out of those 15 minutes is better than any cat clip or fail video online.

Up later are also a “Swedish” movie which make you cringe like never before, especially if you are Swedish. The whole cast in this old movie from the 80’s are Swedish, but in some weird way, trying to hit internationally, they (tried) speaking english. The acting and special effects really makes this horror movie more of a hilarious comedy. I will talk about “Scorched Heat” another day, stay tuned!

Don’t forget to check out the other posts!